Of bus stops and bus rides

Be careful what you wish for. Apparently, Hanoi Bus takes to heart my occasional musings on the bus network of the capital.

In March, for instance, I bemoaned the layout of Kim Ma bus station and the fact the 22 has to go round the block and pass by the bus station entrance again to continue on its merry way. The solution? Don’t route the 22 into the bus station and instead drop the passengers off at a nearby bus stop, just along from Bac Tom’s, that necessitates crossing two busy roads to reach the bus station. Genius. Wishing I’d kept quiet now.

To top matters off – on the return leg, the empty 22 that used to sit waiting for me in the bus station, has now been replaced by a 22 that is packed with passengers and I have to stand all the way to Hang Dau. 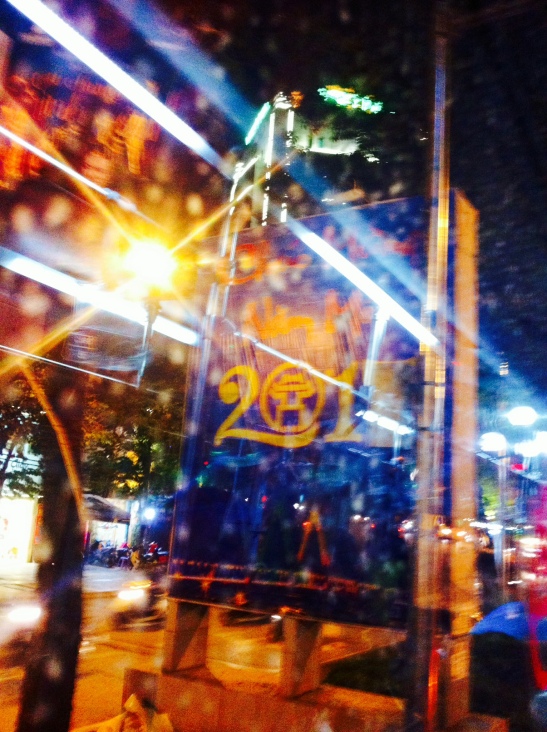 Once in a blue moon, however, I step off the 22 and there’s a 41 right behind it. Ninety nine point nine per cent of the time it’s a bit of a wait. This isn’t too much of a hardship, though, as I chat in very broken Vietnamese to a couple of xe om drivers that wait at the bus stop touting for business.

What I have learnt is that it is more or less pointless yomping up to Long Bien bus station. On the few occasions I have tried this, invariably the first bus that comes along heading my way is the 41 containing the passengers I left behind at the Hang Dau bus stop. In theory I should have more bus options to get home from Long Bien, namely the 31, 58, 55 but it hardly ever seems to work out that way.

Likewise in the morning. If the 7.10 leaves at 7.10, there are few passengers waiting and the traffic is moderately light, there is an outside chance of catching the much less crowded 18 instead of the standing room only 22. But only if I can see the 18 parked at the little kiosk while the ticket seller goes off to do something there.

In these circumstances, there is a 50:50 chance of catching the 18. But only if the 22 beats the 18 to the lights and they are in our favour. If the 18 gets a red light the 22 can get in front and drop me off at Hang Dau in time to catch the 18 coming up behind.

A green light, however, is bad news. The 18 gets the jump on the 22 and even if we arrive at the bus stop simultaneously the doors of the 22 won’t open until 18 has moved off. This lead me to theorise whether I had enough time in these circumstances to beat the 18 on foot to its next bus stop.

After some time weighing this up I gave it a go one Friday out of interest. I hopped off the 22 just as the 18 moved off and immediately crossed the road and cut through the little park passing the kung fu guys and the fountain to the road opposite. Despite my best efforts the 18 narrowly beat me as the traffic at that time of the morning was heavy, making crossing the road hazardous.

By the time I admitted defeat and turned back two 22s had come and gone. As an experiment it was a bust but at least it satisfied my curiosity. I am confident that I have tweaked my bus journey as much as is possible. For now.

If Hanoibus are reading this; you are the best, Hanoi has a fine bus network.

UPDATE: The roadworks on Yen Phu has completely screwed this up. The 41, and all other buses, are routed down the very narrow Yen Phu nho that runs parallel, and the bus takes significantly longer to reach Long Bien.