Only after having lived in Vietnam for a certain time do you fully appreciate the subtle differences and nuances that you never find in guidebooks. Here are 10 things I have learnt about Vietnam.

You know you have been in Vietnam a while when you catch yourself saying, “It’s cooler today, it’s only 30.”

The drivers on the BRT buses all graduated from the Stevie Wonder school of driving. This is the only plausible explanation for all the sharp braking that goes on.
Meanwhile, the older buses in the Hanoibus fleet, currently being phased out, weren’t purchased with foreigners in mind. When you are not bashing your head on the ceiling, there are certain seats you avoid as they are clearly not meant for people with legs.

The Vietnamese course of the popular online language learning tool operates in a vacuum. It provides only a good grounding and gets your mouth moving in the right direction. And that’s about it. Nothing in there will ever prepare you for a proper conversation with a sane Vietnamese person. I have never yet had to deploy, “The fish bites the mug.”

The padlock on your front gate isn’t just about security. The two-handed maneuver through the holes in the gate is also a vain attempt to prevent you from getting rat arsed. 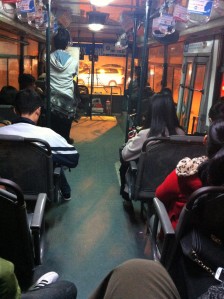 Unless they want to introduce you to their parents fairly rapidly you aren’t really an official boyfriend or girlfriend. If you are taken round to the family home to be paraded like a racehorse, chances are you will soon be considered the best thing since bánh mỳ trứng was invented.

On the other hand, being introduced to the family means you are viewed as potential husband/wife material.

The traffic isn’t nearly as chaotic as it first appears. After some time you begin to appreciate that there is a system that operates to prevent all the potential collision courses intersecting at the same point. Surprisingly, there is relatively little road rage. The vast majority of drivers are incredibly tolerant of other road users. 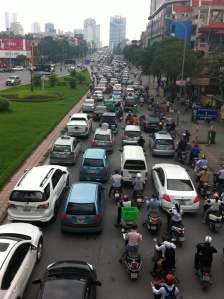 That said, pedestrian rage is a thing. What grinds my gears particularly are motorcycles driving on the pavement (sidewalk) and traffic stopping on the pedestrian crossing, completely blocking the way for pedestrians who have waited patiently for the lights to change. Ffs, those black and white stripes aren’t road decoration or temporary parking spaces. And you chose to drive a xe máy to work. Don’t expect me to get out of the way if you decide to drive on the pavement.

If you are a nervous type, or generally averse to getting run over by traffic, look for an old Vietnamese person and cross with them. The old-timers know how to boss the traffic. Holding your nón lá aloft also seems to work well.

Hot, hot and wet with occasional thunderstorms, pleasant, and ‘Maybe I will put on a pair of long trousers today. ‘

Saigon, on the other hand, has only two seasons: mental hot and hot and wet.

Where are you going?

This shouldn’t be taken literally. What is really being asked is, “Do you have enough time to stand here and chat with me?”

Feel free to add some of your own observations on life in Vietnam in the comments section below.