Apparently, I am reliably informed, my snoring sounds like a Honda Super Cub trying to start.

While I am quite pleased with the retro appeal of such a 70s icon, having a snore that resembled a Honda Dream might be more apt. 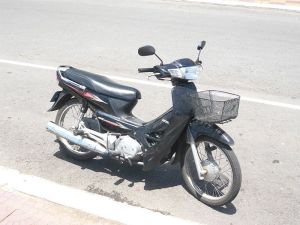 Strangely, my father has been told the same thing. Though he did note it was a generic motorbike noise, it had never been pinned down any further than that.

Talking of modes of transport in Vietnam, it’s now evident that the chaos theory is alive in kicking while trying to traverse the city by bus at rush hour.

So, there I was waiting for the 22 outside Kim Ma bus station, and thinking about 300 things at the same time when a bus hove into view. I glanced up as it rounded the bend, then, with my line of sight blocked by trees and fellow passengers, I stepped aboard as soon as it pulled up.

Immediately, I noticed the bus was one of the older members of the fleet but I didn’t think too much about that until we took an unexpected right turn. Suitably roused from my reverie, I then noticed it wasn’t the 22 I was on but the 32. Not a drama, I thought, the 32 is the one that goes past the Opera House, then I can hop off, get a bus to Long Bien and then rejoin the proper route.

Feeling pleased that disaster had been averted, I started looking out for familiar landmarks. After a few minutes, though, it dawned on me that I didn’t recognise any of the streets. When we bumped over a railway line I knew then something was definitely amiss. And indeed it was. It’s the 34, not the 32, that goes past the Opera House.

I immediately got off the bus at the next stop. Goodness knows where I was. I didn’t have a clue. But by pure blind luck, I found myself on the 41 bus route. I just had to confirm with someone at the bus stop that I did, in fact, have to cross four lanes of rush hour traffic to get to the 41 bus stop on the other side in order to be going in the right direction.

Eventually, I stepped off the bus at home at 7.06pm, 96 minutes after I first set out.

Lesson learnt. Always double-check the number of the bus. Just because some security guard that always travels on the 22 gets on doesn’t mean he is going straight home every night.

Suitably chastened the next night, I set off for bus one of three. Had a bit of a wait, then a long slow drive to Kim Ma where the 22 bus was posted missing. Just as I feared it had been hijacked, the 22 finally showed up. By now, it was becoming clear none of my buses were going to synchromesh for me. That the bus gods were not smiling on me was later confirmed at Hang Dau with another long wait after which Yen Phu/Nghi Tam was in gridlock.

Finally, I stepped off bus three of three at 7.12pm. Six minutes later than the previous night when I got on completely the wrong bus.